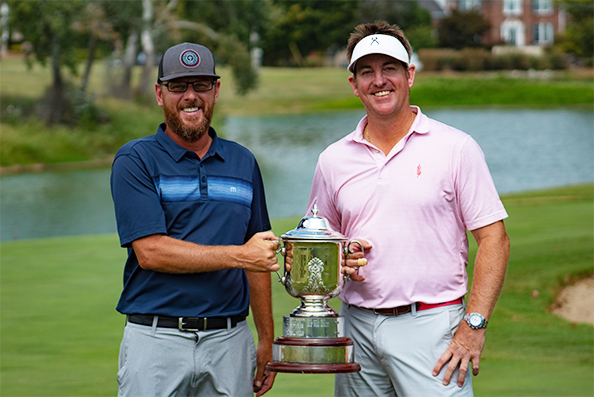 BRENTWOOD, Tenn. — Brendon Wilson has been close to the title twice before at the Tennessee Mid-Amateur Championship, but things hadn’t broken his way on the final day. But after his wire-to-wire victory at Nashville Golf and Athletic, the monkey is finally off his back.

“It’s a huge relief, like this weight has finally been lifted,” the Chattanooga native said after accepting the John Atkins trophy. “Third time’s the charm right?”

In the previous two iterations of the Tennessee Golf Association’s Mid-Amateur Championship, Wilson found himself in the final pairing. But both time’s Wilson couldn’t quite seal the deal.

“The final day at TPC Southwind left a bad taste in my mouth because I kind of gave that one away,” Wilson said. “The next year, no one was beating Todd Burgan on the final day. Hats off to him because he played incredibly.”

Wilson was determined not to let history repeat itself a third time at Nashville Golf and Athletic Club. He had led the previous two days, entering the third and final round with a three-shot lead over fellow Chattanoogan Seth Brandon. It didn’t take long for it to become a two-horse race between Wilson and Brandon.

At the turn, Wilson held a four-stroke lead over Brandon as thoughts of finally getting his hands on the coveted Atkins trophy started to look more like a reality. But over the course of the next two holes, a three-shot swing occurred after back to back bogeys from Wilson were matched by a par and birdie from Brandon. A four-shot lead shrunk quickly to one.

But Wilson didn’t flinch, thanks in part to his caddy Courtney Brazier, who helped steady Wilson’s focus.

“Courtney is a calming force when I have him on the bag,” Wilson said. “I have a tendency to get ahead of myself but he helps bring me back down to earth to just focus one shot at a time.”

It certainly worked as Wilson would play the final seven holes 4-under-par without a single bogey. Three birdies in a row on holes 12 through 14 would normally have been enough to give Wilson some breathing room, but he wasn’t the only one playing a blemish-free back nine. Brandon was hot on his heels.

“He just would not go away,” Wilson chuckled. “Every time we thought we were going to pull ahead, Seth [Brandon] would make a great shot and keep it close.”

Brandon would go on to shoot a 4-under-par back nine to keep the pressure one, but Wilson’s play all week made anyone’s attempt at the title a tall task.

Ryan Terry, the 2018 Tennessee Mid-Am Champion, rounded out the top three by matching Brandon’s final-round 68 on his home course.

For complete results from the 2022 Tennessee Mid-Amateur Championship, click here.