FRANKLIN – After a season in which tournament participation saw an increase almost across the board, the Tennessee Golf Association turns its attention to 2021 as it released next year’s competitive schedule on Friday.

Every TGA men’s state championship enjoyed a boost in registration over 2019 with the exception of the Tennessee Amateur Championship (held at The Honors in 2019), but even it had the second-most entries for the tournament since 2010.

With many recreational activities being disrupted due to the ongoing COVID-19 pandemic, golf was a popular outlet across the country – and that was no different in Tennessee.  TGA executive director Chad Anderson hopes that momentum will continue with an exciting roster of host courses in 2021. 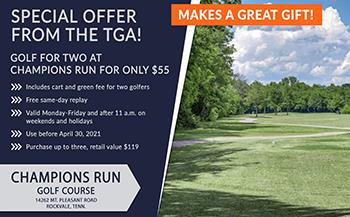 “This past year presented many unique challenges due to the pandemic, and the Tennessee Golf Association did everything we could to provide a safe, competitive environment for our golfers,” Anderson said.  “We saw many of our championships enjoy significant increases in registration and we hope all of you that competed with us for the first time, or rediscovered us, will come back for an exciting schedule in 2021!”

Among the highlights of the 2021 schedule is the return of the Tennessee Open, which fell victim to the pandemic this year and was cancelled for the first time in the tournament’s 72-year history.  The Tennessee Open will return to GreyStone Golf Club on June 8-10.  The event was held at the Dickson, Tenn. course two years ago, with Hunter Green edging fellow professional Brad Hawkins in a play off for the $10,000 top prize.

The 106th annual Tennessee Amateur Championship heads to Council Fire Golf Club for the first time ever and will be contested August 2-6.  The Bob Cupp design in Chattanooga has hosted eight TGA state championships since it opened in 1992, most recently the 2018 Tennessee Match Play won by Oliver Simonsen.

The Tennessee Women’s Amateur Championship will be held at one of the most prestigious courses in Tennessee as Holston Hills welcomes the top amateur women in the state June 29-July 1.  Holston Hills is also scheduled to be the host of the Korn Ferry Tour’s Visit Knoxville Open in 2021.

The 23rd annual Golf Capital of Tennessee Women’s Open will return to Stonehenge Golf Club in Crossville for the 13th consecutive year on July 22-24.  Two years ago, the tournament saw a record number of 127 competitors compete for the title at one of the country’s premier women’s state open tournaments.

The Tennessee Boys’ Junior Amateur and Girls’ Junior Amateur will be held concurrently at the same course for the third consecutive year.  Memphis Country Club will be the site of the Tennessee Junior Amateur Championships on July 6-8.  Memphis C.C. was founded in 1905 and has hosted 17 TGA championships, but only three since the turn of the century (2003 Mid-Amateur, 2009 Women’s Amateur, 2014 Men’s Amateur).  The course has a unique history in that it was originally a 9-hole course until 1915, when Donald Ross expanded it to 18 holes on just 105 acres located near downtown Memphis.

The remainder of the men’s tournament schedule in 2021 features several other highlights.

The Tennessee Mid-Amateur Championship, which enjoyed a record number of entries at TPC Southwind this past season, moves to Oak Ridge Country Club on Sept. 16-18.  The Tennessee Four-Ball, which sold out and had an extensive waiting list in 2020, will be played at Black Creek Club in Chattanooga on June 22-25.

The popular Parent-Child Tournament on Father’s Day weekend will be held June 19-20 at Stonehenge Golf Club in Crossville.

Registration for TGA state championships has historically opened the first Wednesday in March, though that date has not been finalized for 2021 as of press time.