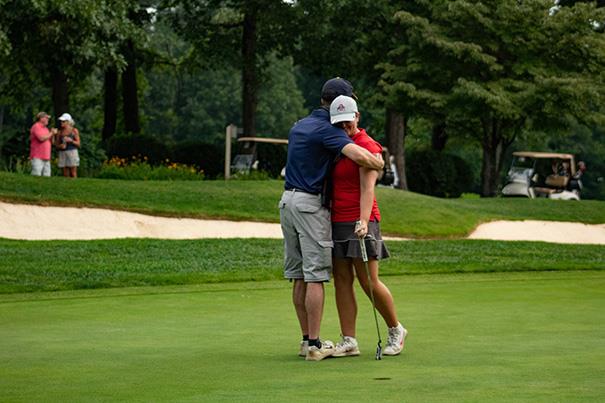 CROSSVILLE, Tenn. — Only one player managed to turn in a scorecard at even-par or better in all three rounds at the 23rd Golf Capital of Tennessee Women’s Open. Hailing from Mineral Wells, West Virginia, Adeena Wilcox did just that en route to her first win as a professional golfer.

“I don’t think I’ve let it quite sink in yet,” Wilcox said after the round. “I’m very happy. Ecstatic to get to call everyone who has been supporting me, watching scores online.”

Thanks to that steady play, Wilcox was never out of the hunt as Stonehenge Golf Club challenged golfers. Only three under-par rounds were turned in on day one, with Thomasville, Georgia’s Jessica Welch holding a three-stroke lead. Wilcox was four shots back after an even-par 72.

Wilcox repeated that feat over the next 18 holes with another 72 and other golfers shifted their positions heading into the final round. Things weren’t going to be easy for Wilcox with three players within one shot of her lead.

Among those nipping at Wilcox’s heels was the defending champion, Sophie Linder (Carthage). She celebrated her 18th birthday during round one and then in round two carded a 1-under-par 71 to jump eight spots on the leaderboard. Right by her side was Knoxville’s Alyssa Montgomery who had an identical 145 two-day total, securing her spot in Saturday’s final group alongside Linder and Wilcox.

The final round provided plenty of drama as the day unfolded, turning into a bit of a three-horse race down the stretch.

After nine holes, Wilcox maintained her one-stroke lead as she, Welch and Linder each turned in front-nine 35s. But the par-5 hole 10 instantly shook up the leaderboard. Welch, playing in the second to last group, birdied the hole while Wilcox bogeyed and Linder made par. Welch took a one-shot lead because of it as Wilcox and Linder found themselves tied for second.

Welch maintained her lead until the next par 5 on hole 15. The 29-year-old made par while Wilcox and Linder each sunk their birdie putts on the tiered green. Wilcox put the pressure on with another birdie on 16 to move to 2-under-par for the day and the tournament.

“My putting definitely helped a lot today,” Wilcox said in reference to her back-to-back birdies on holes 15 and 16. “I would say it definitely was the key to my success.”

As the pressure built, so did storm clouds to the east. With the second to last group in 18 fairway and the final group putting on the 17th, the Tennessee Women’s Open entered a 45-minute weather delay.

After play resumed, Welch and Linder did all they could to try and catch a rising Wilcox, but both ended their final three holes 2-over-par. As Wilcox made her way towards the 18th green, the realization that she was about to earn her first professional win just a few months after turning pro started to sink in. 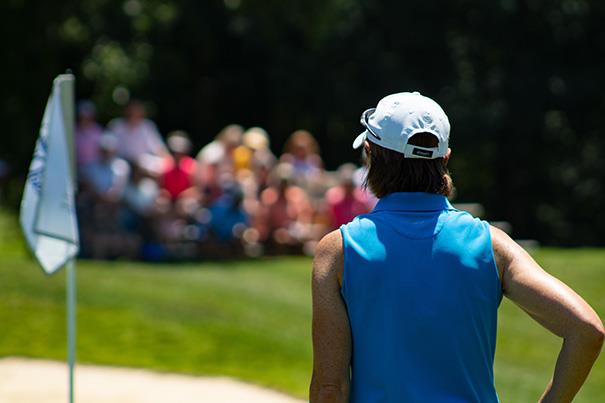 After making her par putt, the crowd erupted with applause and Wilcox embraced her brother who served as her caddy during her first-ever trip to Stonehenge.

While Welch and Linder headlined the effort to capture the title, a few more were in contention at various points throughout the day. One of the pros making a late push was Coulbia’s Riley Rennell. After a tough first round where she shot a 5-over-par 77, Rennell leapfrogged her way up the leaderboard with an even-par second round. But the third and final round is where she turned on the afterburners. The 23-year-old first-year pro fired a bogey-free, 3-under-par 69 to put herself in a tie for third.

Clarksville’s Catherine Caudill was also right there in contention on day three, entering the final round 2-over-par. For every bogey she carded, she managed a birdie not long after. Her even-par 72 earned her a share of the Low Amateur award with Sophie Linder.

Alyssa Montgomery finished a shot back from completing a three-way tie for Low Amateur. Her only real blemish on the final day happened on hole 14, a hole she had birdied the two previous days. The Virginia Tech product settled for a double bogey after putting her tee shot left of the tricky downhill green.