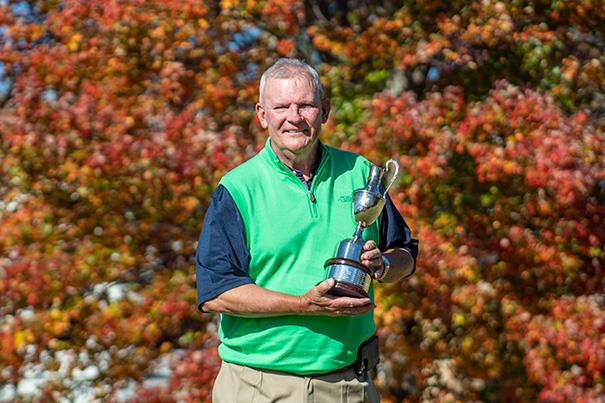 SIGNAL MOUNTAIN, Tenn. — As Mike Poe walked off the 14th green a champion at Signal Mountain Golf and Country Club, emotions overcame him. He buried his head in his wife Sandy’s shoulder as a weight was lifted off his shoulders.

“I’ve been playing some of the best golf of my life in the last 14 months but I kept coming up just short,” Poe said after accepting the John T. Lupton Cup. “Getting this win was the culmination of a lot of hard work and patience.”

Leading up to the Senior Match Play Championship, Poe had missed opportunities to win his second Tennessee Golf Association championship.

In the Senior Four-Ball, Poe and partner Bob Rice missed the cut by one stroke. At USGA Senior Amateur qualifying, Poe was two strokes away from getting into a playoff. In August, Poe finished tied for second at the Tennessee Senior Amateur. A year ago at the Senior Match Play in 202, Poe after finishing as runner-up in 2021, falling to Jeff Golliher in 19 holes.

But this time around, Poe had a decisive final-round victory, defeating Tim Richardson 5 & 4 in both of their second rounds of golf on Friday.

Things weren’t quite as quick in Poe’s road to the finals. In fact, each of his previous three matches went 18 holes or longer. He won them 1 up, 20 holes and 2 up, respectively.

The competition throughout the match play portion was fierce. There were very few quick matches in the entirety of the Senior Match Play, with only five of the 15 matches ending before the 18th hole.

Richardson only recently started playing in TGA senior events but has quickly made his name known around the state. He started last season in 2021 following his 55th birthday. In 2021, Richardson missed the cut at the Senior Match Play. A quick turnaround for the Cookeville resident as he earned his spot in the final match, defeating the 1-, 4- and 9-seeds en route to his meeting with Poe.

The Super Senior Match Play bracket featured equally competitive play with the average match lasting over 17 holes. To get to the finals and have the opportunity to defend his title, Signal Mountain’s Tom Baird won his two matches 5 & 4 and 1 up before meeting Tennessee Golf Hall of Famer Danny Green in the finals.

Their match went the distance… and then some.

Baird led 3 up through 13 holes before Jackson’s Green surged back, winning three straight holes to tie it heading to the penultimate hole. Eighteen wasn’t enough for the two, as they drove straight to the first tee after Baird narrowly missed a birdie putt on the 18th green.

On the 19th hole of the match, Baird redeemed himself, sinking his birdie putt this time to capture his second straight Super Senior Match Play title.