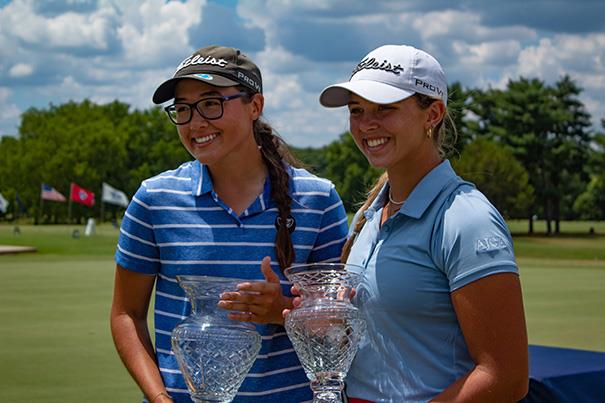 CHAPEL HILL, Tenn. — The win didn't come easy for Germantown's Sophie Christopher but the victory was just as sweet as she was handed the Ruth Eller trophy on Thursday. The Class of 2024 grad held off the field by just enough with her final-round 71 to edge out the field.

The final round wasn't without its drama. Entering the final 18 holes, Christopher found herself tied for the lead with Ethridge's Karlie Campbell and Wartrace's Vilda Westh Blanc. And two groups ahead of them was Jackson's Claire Henson who surged to the front of the back on the closing day.

Henson's 1-under-par 70 on day three was one of just two under-par rounds Thursday along with Murfressboro's Isabella Johnson. Playing even on the front nine, Henson put the pressure on Christopher with a pair of birdies on holes 11 and 15. Christopher, who through 14 holes was 2-over for the day, turned it on late, birdieing two of her final three holes to win by two strokes and avoid a playoff. Vilda Westh Blanc and Karlie Campbell finished third and fourth respectively.

Lauren Slatton rounded out the top five thanks in part to her second day of work. The McMinnville native tied for the best round of the tournament, shooting a 3-under-par 68 on the second day with four birdies and an eagle on the par-5 hole 3. The only other competitor to match Slatton's 68 was Christopher on the first day.

Carlee Rogers (Hixson) was the youngest golfer to finish inside the top 10. The Class of 2026 product finished tied for sixth with an 8-over-par 221 three day total. Isabella Johnson, Class of 2025, also cracked the top 10 thanks to her strong final day where she finished 1-under-par with a trio of birdies. Franklin's Bella Bugg was also one of just six golfers in the 57 player field to record an under-par round. Her 1-under-par 70 on the second day helped her finish tied for sixth.