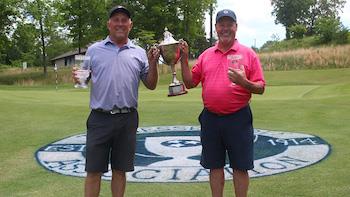 It was a dramatic, though fitting, finish for the Men’s Senior Four-Ball Championship as Steve Lupear and Tim Pugh captured the Joe Chalmers Trophy Friday afternoon.

They battled James and John McCord all day long. A birdie-filled back nine made for a back-and-forth affair. Both teams traded birdies, finishing as a group with 7 birdies and 2 pars in the final nine holes.

In the end, a birdie putt on the par-3 hole 17 from Pugh was the deciding factor as he and his partner Lupear won 1 up. The two hugged as they celebrated their first victory as a team, Lupear’s first Tennessee Golf Association victory ever.

It was an uphill battle from the beginning, not just because they entered match play as the 7-seed and having to defeat four-time Joe Chalmers Trophy winner Steve Golliher in the semifinals, but also because they were on the wait list until two weeks before the tournament.

Now, Pugh and Lupear are celebrating their win and looking forward to defending their title next year.

It was a “grind-it-out” victory for Green and Dinwiddie. In order to advance passed the semifinals, they had to go to extras, edging out two-time Jim F. Brown Trophy winner Neil Spitalny and his partner Tom Baird in 20 holes.

From there the teams traded blows, with the birdie from Dinwiddie on 16 ultimately the deciding factor, though Harris and Nixon conceded on hole 18 making the final mark 2 up for Green and Dinwiddie.

Green fought through a recent surgery on his left shoulder, saying it still effected his swing, but not enough to keep him off the course.