2022 Tennessee Players of the Year 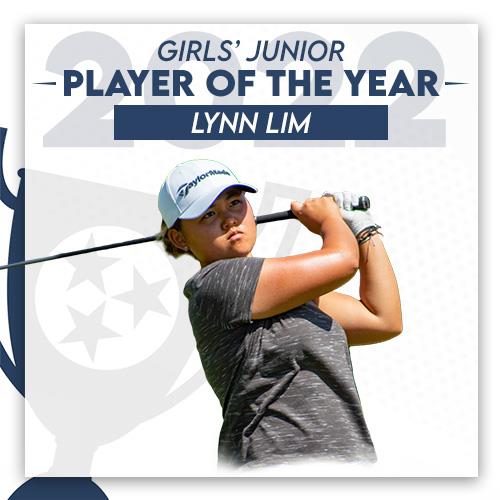 “I’m truly honored and humbled to be a part of this fantastic group of players,” Lim said.

Lim had one of her best seasons ever in amateur golf this summer season. It started with a runner-up finish in the Women’s Match Play at her new home course at Vanderbilt Legends Club. A week later, she captured the Tennessee Women’s Amateur title at Chickasaw Country Club. That snowballed into Round of 64 appearances in both the US Girls’ Junior and US Women’s Amateur Championships.

“It’ll take some time to really set in,” Lim said of her second player of the year award. “It does serve as validation to the commitment and work I’ve put into this sport.”

Her success in golf carried over into her freshman year at Vanderbilt University where she helped the team finish Top 3 in three of their four fall events. Her first focus come the spring season is to continue to help the Commodore’s women’s golf team find success on the course, but she also have lofty goals for herself next summer season.

“I’m always working to get a little better each time I go out to practice and play a round, no matter the setting,” Lim said. “The Tennessee Women’s Player of the Year would be an incredibly high honor that I will continue to work towards.”

“I also want to give a big thank you to my family, my friends, my coaches and everyone that’s pushed me to be the best person and golfer I can be,” Lim continued. “Without their support, there’s no way I could reach all my goals.” 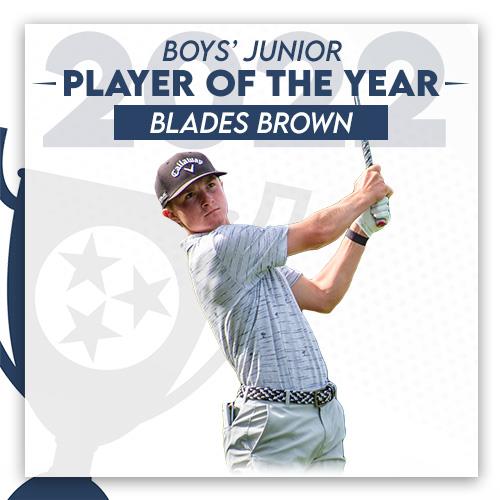 Blades Brown is no stranger to the Tennessee Junior golf scene. He burst onto the scene in 2021, capturing the TSSAA Division II AA individual title at age 14. Brown successfully defended his title in 2022, while earning one of the most coveted Tennessee Junior golf awards: the Boys’ Junior Player of the Year.

"It's been quite the journey this year," Brown said. "From Bandon Dunes to the Tennessee State Am, I'm grateful to not only have played in all these places, but to have played well, too."

"I believe you can get better every single day," Brown said.

His feats this year, however, extended beyond just the world of junior golf. In the Tennessee State Amateur, Brown was in the final pairing and finished in third in the four-day event. Also this year, Brown and Jackson Herrington qualified for the 2023 US Amateur Four-Ball tournament at Kiawah Island Club in South Carolina.

"Being in the final group within a field of golfers I look up to was really cool," Brown said. "The State Am was my favorite tournament this year in Tennessee because of the people I got to play with."

The road doesn't end here for Brown. While he admittedly has accomplished a lot at such a young age, his sights are set even higher. His dream is to one day play on the PGA Tour, but first he wants to qualify for a pro event. Brown isn't far off either. At the 2022 Simmons Bank Open Monday Qaulifier, Brown was just one-shot off from making it to the Simmons Bank Open.

US Junior Amateur - Round of 64 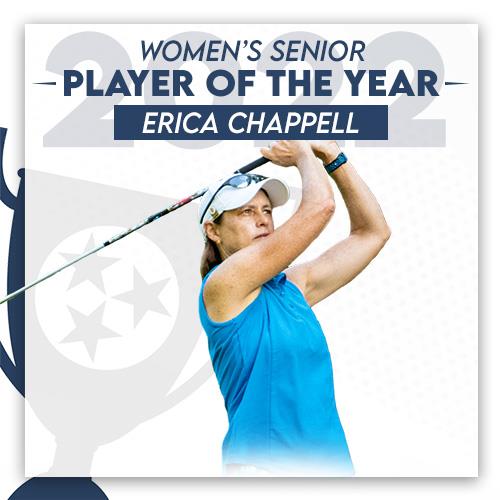 In the 23 seasons the Women’s Senior Player of the Year Award has been given out, there have been just seven winners. In 2022, however, the exclusive club welcomed its eighth member, Nashville’s Erica Chappell.

“What an honor it is to now be a part of this incredible group,” Chappell said.

It was one of the best complete seasons of golf in her career, she said, coming away with three Top-3 finishes in Tennessee Golf Association events and a Top-5 finish in the WSGA Senior Amateur, ending the three-day event tied for fourth with two-time Tennessee Women’s Senior Player of the Year Sarah Ingram.

“I started out the year playing not as great as I wanted, but I really hit my stride later in the season,” Chappell said.

Chappell credits the improvement in her play to a focus on her mental game. Within the last year, she said, she’s taken big strides forward in the mental aspect of her golf game. That has been a big difference.

“I’d say 70 percent of the work I’ve been doing has been in my mental game,” Chappell told the Tennessee Golf Association. “There are some mechanical and on-the-course changes that have helped, but the majority is mental.”

Chappell’s competitive edge came later in her golf career. She credits the 2015 USGA Senior Women’s Amateur as the spark that led her to begin training to compete on the top stages in Tennessee and the nation.

Her next goal is to capture an individual title, with her sights set on the Tennessee Women’s Senior Amateur, an event she finished third this past season. 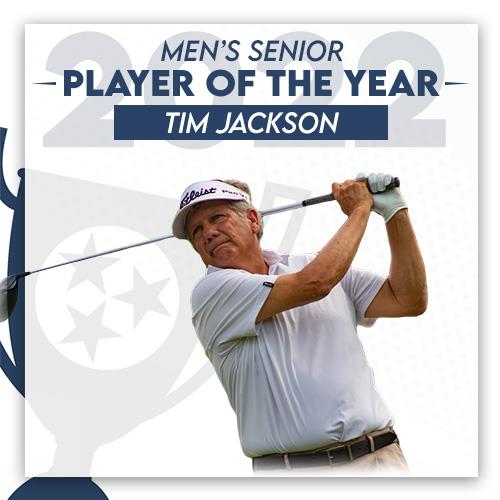 While many could look at the laundry list of accomplishments completed by Jackson and call it a career, Jackson shows no signs of slowing down.

“I am continuously motivated to play well,” Jackson said. “And really what it boils down to is I still enjoy the process it takes to gear up for the state events.”

He continued to show his mettle in many of the statewide events this season, finishing as the top amateur in the Tennessee Senior Amateur and Senior State Open. He also was a quarter-finalist in the Tennessee Men’s Match Play where he won a playoff to enter the elimination bracket.

Jackson, 63, says he at least plans to play for the next two years. At that point, he will take a look at what the future holds for him. But no matter the case, the impact he’ll leave on Tennessee Amateur golf will be immeasurable. The legacy he hopes to leave, however, is simple.

“When I’m done playing, whenever that day is, I hope people can say that I was a respectful guy and a heck of a player,” Jackson said. “I like to compete, but I love to help people around me get better.”

The Williston man says he is already looking forward to next season, but the Men’s Senior Player of the Year award has never been a goal. He likes to take each tournament one at a time and make sure he is in the best position possible to score well at every tournament he plays in.

“Earning Player of the Year honors is a result of good planning and preparation,” Jackson said. “The things I do, I try to do them well.” 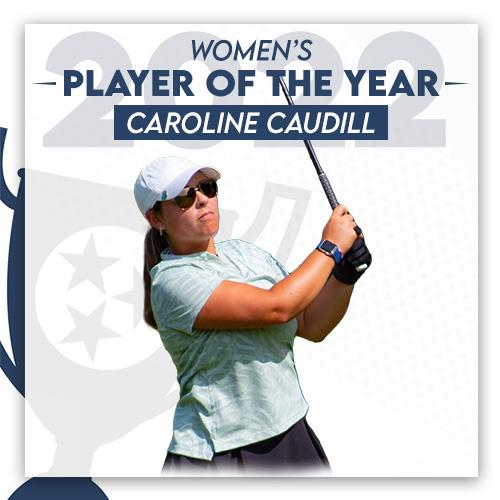 The road to success is paved with blood, sweat and tears… and that’s what it took for Clarksville’s Caroline Caudill to earn the 2023 Tennessee Women’s Player of the Year.

Her golf career really began around the age of seven when her grandfather pushed for her and her sister Catherine to play in more state-wide events. From there, her golf career took off, eventually leading her to taking top honors in her home state.

“My granddad was a big part of my golf career,” Caudill said. “After I called to tell him about the award and he told me how proud he was of my hard work paying off… that’s when the magnitude of this award really started to set in.”

Caudill said she traces the success she had this season back to the fall of 2021. In her final fall semester at Middle Tennessee State University, she was practicing every morning before class. Every Friday she could, she worked with swing coach Johnny Warren and they made some big changes to her swing.

“I have a habit of overswinging so we really worked on correcting that and dialing in my game,” Caudill said.

It translated to a successful final spring season at MTSU where she led her team in scoring average and earned the 2022 Conference USA Most Improved Player Award. The success continued into the summer season, finishing in the top 10 in every event she played in, both in and outside of Tennessee.

“I feel like I’ve worked extremely hard, especially this past year,” Caudill said. “The way I played this summer was a direct result of all the work I put in the fall before.”

What’s next for Caudill following her first Women’s Player of the Year Award? Quite a bit. She’s begun her Master’s program at MTSU studying Engineering Management after completing her undergraduate degree in Mechatronic Engineering. In addition, there’s a wedding to plan after getting engaged this fall. She hopes to also find some time to get some more golf in with everything else going on.

“I wouldn’t know where I’d be without the TGA events I played in growing up and in the summers,” Caudill said. “They made competing at a high level accessible to many people in Tennessee, including myself.” 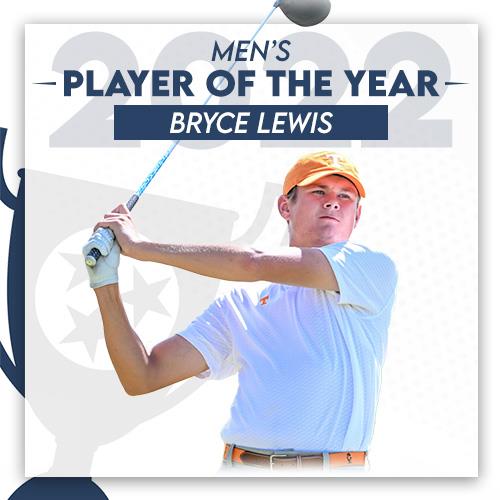 This is not the first time Bryce Lewis has been the top golfer in the state. The Hendersonville native first popped on the scene in 2017 when he won the 2017 Boys’ Junior Player of the Year. He’s back on top in 2022, but this time as the Men’s Player of the Year.

“These accolades are the kinds of things you get when you put in the work off the course,” Lewis said. “That’s what makes it cool and fun. I don’t go out to chase accolades. I focus on putting in the work, getting better each day and then you just let the accolades chase you.”

The summer of top-tier golf from Lewis started in late June when the Redshirt Junior at the University of Tennessee-Knoxville took home top honors at the Sunnehanna Amateur in Johnstown, Pennsylvania. Past winners of the event include golf greats like Don Cherry, Rickie Fowler, Collin Morikawa, Webb Simpson and Memphis-native Hillman Robbins.

Lewis followed it up with Top-5 finishes at the Northeast Amateur at Wannamoisett Country Club in Rhode Island and the Southern Amateur at Sea Island Golf Club in Georgia.

It all set up Lewis nicely for the US Amateur where he advanced to the Round of 32.

“Being invited is probably the coolest thing I’ve gotten this season,” Lewis said. “I’m going to prepare for it like it’s a tournament… it’s an exclusive list of guys who’ve been invited and made the team. I’m hoping to add my name to that list.”